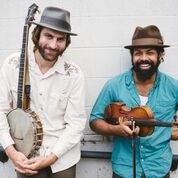 Seattle songsters Ben Hunter & Joe Seamons give life to voices that have long been silenced in American culture. Their award-winning performances are highlighted by story-telling that, rather than bringing the past to life, vividly shows how the past still lives in the present.

With the same versatility that won them the International Blues Challenge in 2016, and allowed them to record with National Heritage Fellow Phil Wiggins, the duo celebrates the ways Americans have triumphed over oppression through the vitality of their art. Audiences walk away from Ben & Joe’s concerts and workshops inspired to learn more of their own history, and engage more deeply with their communities.

“Their deep explorations into roots music inhabits every performance and identifies what they do as the real deal.” – Patrice O’Neil, Wintergrass

“I was totally blown away with Ben and Joe – I laughed, I cried, and I wanted to shout from the mountaintops!” – Lisa Husted, Grey Fox Bluegrass Festival

“Hunter and Seamons expertly perform with a joyous missionary zeal.” – Steve Hunt, Roots
“Ben Hunter and Joe Seamons aren’t so much a throw-back to the music of the pre-war era songster tradition as they are alchemist-shamans, seemingly sent from those times to the 21st century to wake us up to the music that is embedded deep within us. It is our national heritage. They have been the same wide-eyed children caught by the magic of the songs they learned from their elders. They have grown to be todays songsters.”