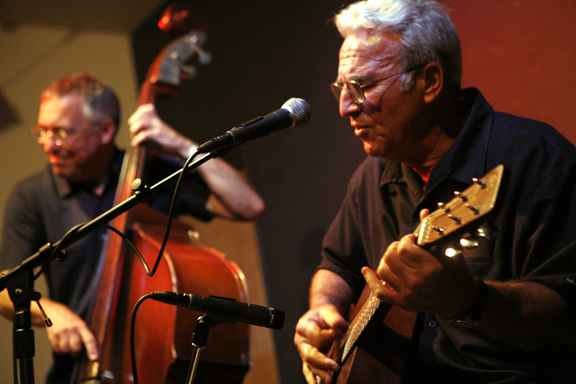 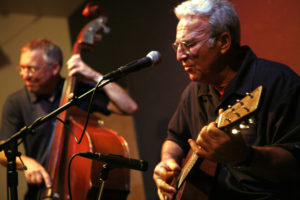 The blues is life itself to Bernie Pearl. A guitarist with an upbeat, finger-poppin’ picking style he learned at the elbows of bluesmasters Sam ‘Lightnin’ Hopkins, Mance Lipscomb, Mississippi Fred MacDowell, and others. Yet, Bernie Pearl is no hidebound traditionalist. As music critics and aficionados have said for years, he is a craftsman who packs his songs with melodic interpretations that are new and personal each time he picks up his vintage Martin or National. To hear him tell it, “I’m not a retro player. I’m playing real blues for right now.”

Bernie, who grew up in the Los Angeles community of Boyle Heights, took up the guitar in the 1950’s. Later, at his brother’s legendary blues showcase, the Ash Grove, he met, studied with, and often performed with greats like Hopkins, Lipscomb, and MacDowell as well as with Freddie King, Albert Collins, and Big Mama Thornton. Bernie played duets with John Lee Hooker at Gerde’s Folk City in Greenwich Village. “They were my teachers,” he says, “and it wasn’t just music they were teaching. If you took Mance or Lightnin’ out fishing you got philosophy, history, and lessons in life”.

Armed with the teachings of those and other blues icons, Bernie raises the roof with dazzling guitar solos – acoustic and electric – and with his own Bernie Pearl Blues Band, which has backed the likes of B.B. King, Stevie Ray Vaughan, Willie Dixon, and Big Joe Turner. The Bernie Pearl Blues Band has been a popular draw at many of Southern California’s best-known musical haunts: the House of Blues, California Plaza Presents, the Blue Café, Disney’s California Adventure, and the Playboy Pasadena Community Jazz Festival. Bernie has appeared at major Festivals in Chicago, The Poconos, Vancouver, Portland, and Long Beach, as well as in Europe.

A life-long blues evangelist, Bernie began broadcasting Nothin’ But the Blues on KPPC FM in 1968, making him L.A.’s first all-blues FM disc jockey. He went on to host the blues on KLON and KCRW from 1980-92, helping found the Long Beach Blues Festival along the way.

His 15-year relationship with Louisiana blues man Harmonica Fats produced three outstanding CDs, with the unplugged Two Heads Are Better and Blow, Fat Daddy, Blow, each garnering W.C. Handy nominations in the mid-1990’s. Tonight Pearl shares the stage with bassist/producer Mike Barry who is a perfect match to set the groove for the tunes they perform.

As president of Big Time Blues Productions, Pearl was named national “Blues Promoter of the Year” by the Blues Foundation in 1987, and he continues to book, promote, advertise, and oversee blues acts at annual events such as the Big Time Blues Festival and the Blues Harmonica Blowdown. He has taught blues history and blues guitar courses at several area universities, and continues to teach at Cal State Long Beach, as well as privately.

“…Pearl’s music and voice evoke the unpretentious, truth-telling qualities of the blues. The sparse arrangements that grace this 15-song set only heighten the soulful and spiritual nature of the music. Pearl’s guitar virtuosity is evident, whether he’s playing lead, rhythm, or slide guitar…his version of (Son House’s) Shetland Pony Blues would make the old master proud”

“Making blues music draws from someplace deep,” he says. “I’m lucky. It’s what I do.”