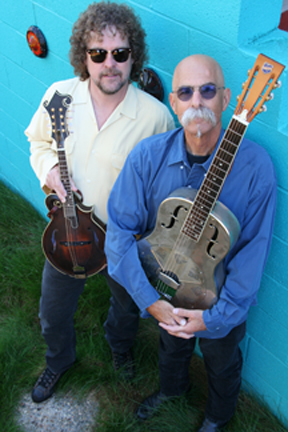 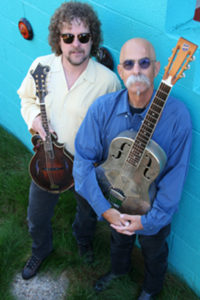 Mandolinist/guitarist Kenny Blackwell studied with Jethro Burns before moving to California where he joined fiddler Richard Green’s band in ’93. His mandolin and guitar work have been heard in TV and movie scores. He was a member of the famed Laurel Canyon Ramblers which he joined in ’94.

Guitarist Dorian Michael has played in about every style and in every type of work situation a blue collar musician could hope for. After years of honky-tonk electric guitar followed by concentrating on solo fingerstyle guitar this duo with Kenny is a real horizon broadener.

After Kenny and Dorian met by chance in a music store in San Luis Obispo, then at a backyard jam session, and again at a music convention in Los Angeles, they decided it was time to play some music together. Kenny, one of California’s foremost mandolinists, wanted a chance to play outside of the bluegrass genre in which he is constantly in demand. Guitarist Dorian Michael was looking for a skillfull musician who understood a wide variety of roots music. Six months later their first CD was released and they were touring as a duo.

The duo’s diverse backgrounds are the wellspring for a performance of exciting and heartfelt music. Their enthusiasm for making music and their respect for their audience is plainly evident whenever they perform. Says Dorian, “Some music makes you feel deeply, some music makes you think and some tunes are played just for the sheer fun of it. We like to try to get to all those places in the space of a concert.”

Plus Fred Sokolow a master of several stringed instruments, and who has recorded countless CDs and written numerous instruction books, from rock to bluegrass to jazz. Bob Baxter  was quoted as saying, because of Fred’s mastering of so many genres of music, that “Sokolow should definitely be included with those four other guys on Mt. Rushmore.”