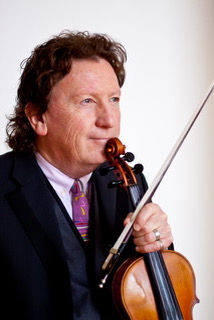 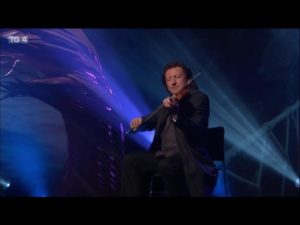 Innovation may be the buzz-word in Traditional music, but Frankie Gavin’s digressions are not in the common areas of tempo and superficial style-impressions. His contemporary borrowings of art-deco and music-hall Irishness are re-jigged in original avenues of exploration. His dextrous treatment of troublesome tunes might get even the Pope out on the floor, his orchestration could break hearts.
A superbly uncompromising player, he makes refreshment of the old by picking out and polishing every detail and setting it off in a steady, listenable pace. Gavin edgy and brilliant on both fiddle and flute, with always the most meticulous attention given to tone and variation. Live, his tune sets are perfectionism that drive and are driven by an audience spontaneity that spurs Gavin to push fiddle from shriek to rasping bass.
Tears and cheers erupt spontaneously, the goodwill of his mixed-age audiences has always been great sauce. Like herding the mythic creac, Frankie Gavin here whoops a great retrospective before him into the Ogham of Celtic Valhalla.

When De Dannan split-up in 2003, Gavin founded a new group, Frankie Gavin and The New De Dannan, which led to an acrimonious exchange between Gavin and Finn. According to Finn, he had registered the ‘De Dannan’ name.

Gavin has played and recorded with Andy Irvine, The Rolling Stones, Elvis Costello, Stéphane Grappelli, and Frankie Goes to Hollywood, and in 2010 became reputedly the fastest fiddle-player in the world, with an entry in the Guinness Book of Records.