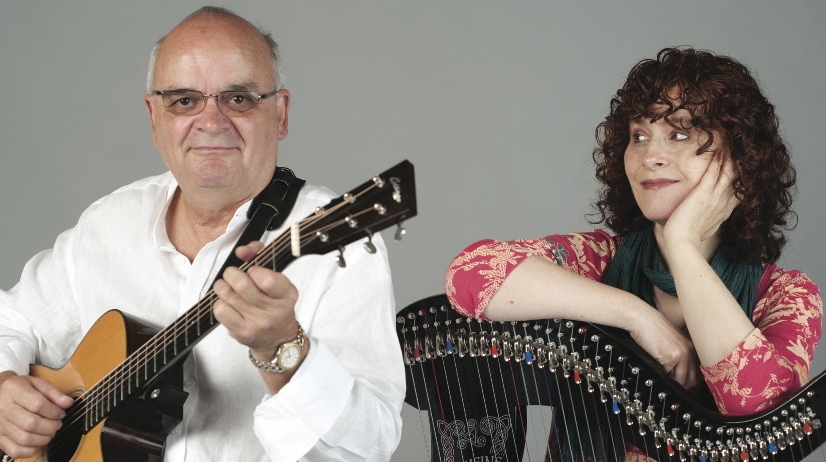 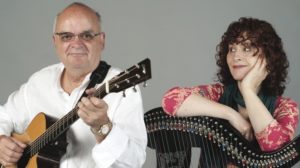 “This celebrated duo took the place by storm. Stately Carolan tunes, jazzy Django-ish numbers, dazzling Doc Watson style flat picking fliers, driving Irish dance tunes – this pair can nonchalantly do the lot. Guitar players applauded and went sadly home to burn their instruments!” The Belfast Telegraph. The virtuoso partnership of England’s premier flatpicking guitarist and “the greatest Celtic harper of our age” (LIVE IRELAND) has by now brought its unique musical vision to twenty-two countries on five continents.Chris and Máire have performed at over 175 folk, Celtic, arts, harp and guitar festivals in Europe, the USA and Australasia and have given almost two thousand concerts in venues large and small – from the tiniest of historic churches in England, Germany and Italy to palaces in Kyoto and Istanbul, London’s Barbican, Sydney’s Town Hall and the Philharmonie in Cologne. Together they have created one of the most distinctive voices in modern acoustic music. Their six duo and five solo CDs, instructional books and collaborations with many other luminaries of the Celtic, folk, swing jazz and bluegrass worlds express both the depth of their commitment to tradition and an eternally playful, curious and adventurous spirit.Over the years Chris and Máire have toured with Altan, Sharon Shannon, Cherish the Ladies, Patrick Street, the Rankins, Mary Black, Maura O’Connell, Dónal Lunny, Aly Bain, Boys of the Lough and many other leading bands and artists.

Chris is a “brilliant English master of the acoustic guitar” (THE DAILY TELEGRAPH), a “dazzling player” (ACOUSTIC GUITAR, USA) whose work is “nothing short of brilliant” (DIRTY LINEN, USA). He began to play guitar at the age of four and at fourteen played his first paid gig in a folk club. A prolific composer, arranger and record producer, he’s played with luminaries of many musical worlds: folk (Boys of the Lough, Kathryn Tickell, Aly Bain, Danny Thompson, Arty McGlynn, Nollaig Casey – and Máire), jazz (Stéphane Grappelli and Diz Disley) and comedy (Fred Wedlock) – receiving a silver disc for producing Fred’s international hit Oldest Swinger in Town, to which he also composed the tune and which reached No 2 in the charts in the UK and No 1 in several other countries. Maire Ni Chathasaigh is one of Ireland’s most influential traditional musicians, described by the late Derek Bell of the Chieftains as “the most interesting and original player of the Irish harp today” and as “the greatest Celtic harper of our age” by Live Ireland. She has played harp since the age of eleven. As a 1970s West Cork teenager steeped in the oral tradition she developed new techniques that made it possible for the first time to play traditional music on the harp in a stylistically accurate way. These soon became the norm amongst both her contemporaries and the younger generation of Irish players. In 2001 she received Irish music’s most prestigious award, that of Traditional Musician of the Year – Gradam Cheoil TG4 – “for the excellence and pioneering force of her music, the remarkable growth she has brought to the music of the harp and the positive influence she has had on the young generation of harpers”. She won the All-Ireland and Pan-Celtic Harp Competitions several times and in 1985 recorded the first harp album ever to concentrate on traditional Irish dance music, The New-Strung Harp- “an intensely passionate and intelligent record and a milestone in Irish harp music” THE IRISH EXAMINER. Her approach has been profoundly influential – “a single-handed reinvention of the harp”. Máire has performed for a number of dignitaries, among them Pope John Paul II and the King and Queen of Spain.