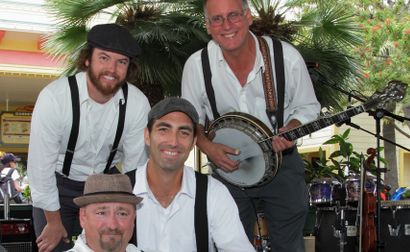 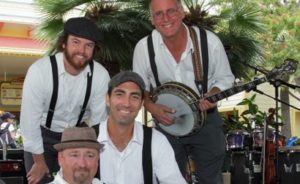 Named among the top acoustic bands in LA (by Folkworks Magazine) and two-time winners of the Orange County Music Award for Best Folk Band, the dynamic ensemble Sligo Rags presents Celtic Folk with a decidedly bluegrass attitude. Sligo Rags is taking the local and not-so-local Folk and Celtic music scenes by storm with a unique blend of eclectic musical influences. Dan Miller of Flatpicking Guitar Magazine says “These guys have it all–great vocals, lots of energy, captivating songs, well executed arrangements, and tasteful solos.” Their debut studio recording, “The Night Before the Morning After”, was called “the best I’ve heard from a stateside band” by Celtic Beat Magazine, while their sophomore effort, “The Whiskey Never Lies,” (called “the best from the West Coast Celts in many years” by Shay Clark of the Irish-American News), was named one of the top 10 of 2007 by Folkworks. Don’t be surprised if elements of country, gypsy jazz and swing manage to sneak their way into the act as well. Award-winning flatpicking and fingerstyle guitarist David Burns (recently featured in Flatpicking Guitar Magazine), fiddler extraordinaire Michael Kelly, and world-renowned bassist Eli Marcus are guaranteed to fill the room and your lives with electricity. They may give you a good laugh or two along the way as well.

“Sligo Rags have mastered the ability to take songs from a time gone by and make them fresh and relevant for a modern audience. Their passion for the music and their willingness to take risks combine for an outstanding live show.”–Music Connection