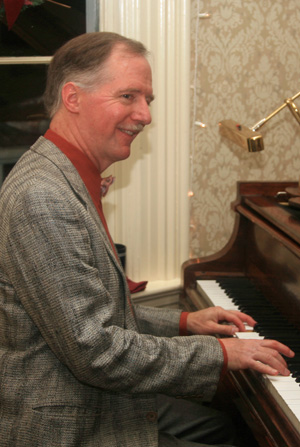 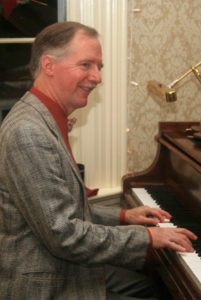 Tonight we are thrilled to death to present one of Gary Mandell’s favorite musicians/entertainers in the world. Musician/Historian Tom Bopp has entertained and educated Yosemite’s guests at the Wawona Hotel (dba Big Trees Lodge) and The Ahwahnee (dba Majestic Yosemite Hotel) since 1983. His interest in Yosemite’s cultural history led him to develop interpretive events for the Yosemite National Park Centennial in 1990, the Camp Curry Centennial in 1999, The Ahwahnee 75th Anniversary (2002), Yosemite Heritage Holidays (2003-2009), regular programs on Wawona history, Theodore Roosevelt and John Muir’s 1903 camping trip to Yosemite, Yosemite music and culture, and a film documentary called Vintage Songs of Yosemite.

Born in southern California (1957) and raised in Torrance, Tom studied classical piano for 10 years and earned a Bachelor of Arts degree from UCLA in Music Theory & Composition.

Tom’s repertoire is an eclectic but by no means comprehensive mélange, representing his shifting tastes in music, or as he puts it, a short attention-span.

In January, 2006 Tom was one of seven out of some 40,000 worldwide employees to receive Delaware North Corporation’s Legacy Award of Service Excellence.

On December 17, 2008, Tom was awarded the annual Yosemite Fund Award (now Yosemite Conservancy) “in recognition of the significant effort he has made to enhance the value of Yosemite National Park as a national treasure.”

Tom entertained at a private home gathering for Vice President and Mrs. Dick Cheney in 2006, and opened for President Barack Obama for his public address in Yosemite Valley in 2016.