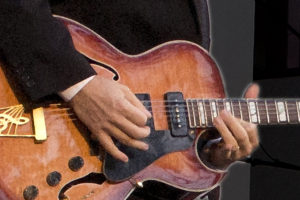 GARY MANDELL
Gary Mandell has given instruction for guitar and keyboard since 1968. He works with and enjoys teaching all ages of students and has had years of experience teaching 4-8 year olds. He has played and taught Folk, Rock, Acoustic and Electric Blues, Jazz (improvisation), Chord Melody (taught with and studied under the legendary Ted Greene), Country (including Chet Atkins style), Bluegrass, and Classical styles as well as arranging and orchestration. Several of his students, especially youngsters, are studying both guitar and keyboards with him to get a well rounded education. He learned firsthand from his father who taught LA Unified elementary for 48 years. Although he claims to be 39 (and has for years) he has been teaching music for over 50 years and loves it. His assignments have included arrangements and orchestrations for the L.A. Philharmonic, Rochester Symphony, and La Mirada Symphony to the Tonight Show band. He is the president/producer of Major Label recordings (available for sale at Blvd. Music coincidentally and his music production (composition, arranging) has included work for Fox as well as CBS television. He has produced the Culver City Music festival (now called Culver City’s Boulevard Music Summer Festival) since 2001. Available for in-store lessons.

TED OWENS
Ted Owens plays and teaches an assortment of different styles of guitar from Flamenco (Ted studied with Adam del Monte) and Classical to Rock (classic and modern) and Blues. With over 25 years of experience as a teacher as well as a recording artist and touring musician Ted is a wealth of knowledge for anyone wanting a diverse background on guitar. Available for in-store lessons.

STAN AYEROFF
While studying composition at the California Institute of the Arts, Stan fell in love with swing music, especially Django Reinhardt and the Hot Club of France. He went on to write books on Django, Charlie Christian and Benny Goodman. He has performed with Texas R&B singer Delbert McClinton and was co-musical director (with Danny Elfman) of the original “Mystic Knights of the Oingo Boingo”. Stan served as Orchestral Supervisor for Rod Stewart, Page and Plant and The Who. He conducted a chamber orchestra for Heart’s concert video “The Road Home” on Capitol Records. He has been the musical director for a series of projects featuring Roger Daltry of The Who, and has worked as arranger for songwriter David Baerwald (David+David, Sheryl Crow). Stan has a lifetime of knowledge to share with his students in the following areas: Swing (including Gypsy Jazz), Solo Guitar, Blues, Classic Rock, Classical, and Jazz Harmony for Guitar. Check out Stan’s arrangement of “Stairway to Heaven” from one of his solo guitar books (2,600,000 hits) performed by Per Olov on Youtube! Available for in-store lessons.

BERNIE PEARL
Bernie Pearl has lived and played in LA since the early 60’s. An apprentice to legends like Lightnin’ Hopkins, Mance Lipscomb, and Mississippi Fred MacDowell, Bernie often performed with his famous teachers. He’s backed up a veritable who’s who of the blues: John Lee Hooker, Freddie and BB King, Big Mama Thornton and many others. One would be hard pressed to find a person who knows more about acoustic or electric blues than Bernie. The LA Times did a front page article on the LA Blues icon, Mr Pearl, and his history as a legend of LA Blues. Bernie currently teaches the acoustic as well as the electric blues jam classes at Boulevard Music.