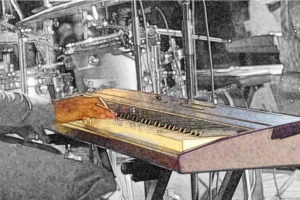 GARY MANDELL
Gary Mandell has given instruction in guitar and keyboard since 1968. He works with and enjoys teaching all ages of students. He actually began as an instructor teaching math first at the age of ten helping his father (an amazing and inspiring teacher) who taught LA Unified elementary school for 48 years and also tutored youngsters privately. He started teaching piano at the age of 13 and has played and taught Folk, Rock, Acoustic and Electric Blues, Jazz (improvisation), Country (including Chet Atkins style), and Classical styles as well as arranging and orchestration. Although he claims to be 39 (and has for years) he has been teaching music for over 50 years and loves it. His assignments have included arrangements and orchestrations for the L.A. Philharmonic, Rochester Symphony, and La Mirada Symphony to the Tonight Show band. His music production (composition, arranging) has recently included work for Fox as well as CBS television. He has produced the Culver City Music festival (now called Culver City’s Boulevard Music Summer Festival) since 2001. Available for in-store lessons.

KATIE NICHOLSON
Having taught piano since graduating from UNR in 2014 and playing for over 20 years, Katie has also been part of multiple ensembles as a pianist, vocalist, clarinetist, and tuba player. She loves sharing the gift of music with her students and makes a point to find music based on each students’ personal interests. Her program focuses on music reading, theory, and technique. She works with students of all ages from young children to adults creating a curriculum based on each students’ skill level. Available for in-store lessons.