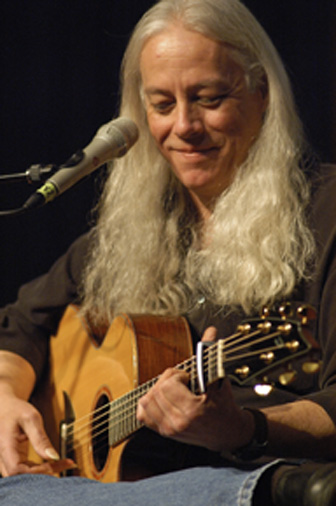 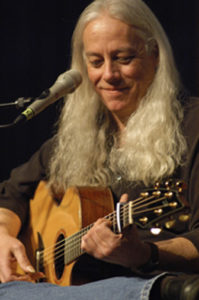 Guitarist Ed Gerhard—Sorry to say cancelled. We look forward to his return when times allow for that.

Performing on 6-string, 12-string, slide guitar or Acoustic Hawaiian Lap Slide, Gerhard captivates his audiences with virtuosity, generosity and sly humor. Known for his gorgeous tone and compositional depth, Gerhard can move a listener with a single note. Scott Alalrik of the Boston Globe said it best when he wrote ‘Gerhard does not write instrumentals. He writes songs only a guitar can sing.

Gerhard’s relationship with the guitar began at age 10, when he happened upon classical guitar master Andrés Segovia on TV. “I’d heard all the pop music on the radio and maybe a little of that 60’s folk stuff, but this was the first time I’d ever heard the guitar all by itself and the sound just instantly got me,” he remembers. Ed finally got his first guitar at 14. His initial interest in classical guitar changed dramatically when he heard the music of bluesman Mississippi John Hurt. He quit lessons after the third one. He took some informal lessons with friends and learned by ear, slowing down LPs to half-speed to pick out the tricky parts. At fifteen, Ed was already beginning to perform in local church basement coffeehouses, playing solo and jamming with friends.

In 1977 Gerhard moved to New Hampshire where he has resided ever since. Joining a thriving folk and acoustic music scene proved invaluable for the young guitarist. “There seemed to be no limitation on places to play back then, or more importantly, what you could play” says Ed. “You could play anything you wanted as long as people stayed around and drank.” When Gerhard was not performing solo he could often be seen sitting in with other musicians. “I loved to play, it didn’t matter if I was solo or sideman.” During this period Ed began composing and arranging music for solo guitar, using a staggering array of alternative guitar tunings.

Based truly on the quality of his work, Ed built his considerable reputation, beginning with his debut album “Night Birds” in 1987. It garnered a spot in the Boston Globe Critics Poll Top 10 Albums of the Year.” Shortly after the album’s release, Windham Hill Records included Ed on its Guitar Sampler (Vol.1). One of the highlights of the three hundred thousand unit selling Sampler, “The Handing Down” introduced the world to the beauty of Ed Gerhard’s music. “That one piece made me a lot of friends around the world,” Ed says.

Ed has released his ninth CD “There and Gone.” He was awarded a GRAMMY® for his inclusion on the CD “Henry Mancini; Pink Guitar.” Warner Brothers, MelBay and Hal Leonard have all released Ed Gerhard’s music in books. His guitar work can be heard on recordings by Arlo Guthrie, Jorma Kaukonen, Bill Morrissey and in the Ken Burns films “Mark Twain” and “ The National Parks: America’s Best Idea.”

Ed’s CD “Luna” is featured in Acoustic Guitar Magazine’s 20th Anniversary list of the “240 Essential Albums.” “This soulful album of original compositions rich in melody, chordal complexity and stylistic variety proves why Gerhard is considered to have the most exquisite acoustic guitar tone on the planet.” -Acoustic Guitar Magazine

Along with players like Ben Harper and David Lindley, Gerhard’s unique approach to the Weissenborn (an acoustic Hawaiian lap slide guitar) is playing a significant role in reinvigorating interest in this somewhat esoteric but beautiful instrument. Ed’s style of Weissenborn playing is unique in that he composes and arranges music for solo Weissenborn with beautiful melodies, complex chords and moving basslines, unusual for an instrument that normally serves an accompaniment role. Ed is featured in the book “Lap Steel Guitar” alongside legendary players like Greg Leisz, David Lindley, Jerry Byrd and more.