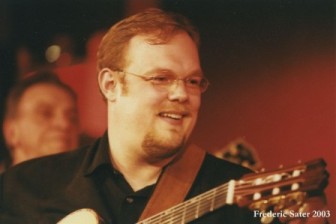 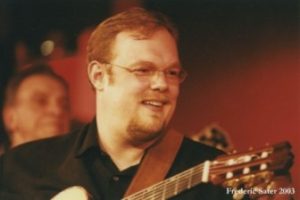 Sorry to say this show has been cancelled and we look forward to Richard coming back when times permit.

Richard Smith is one of the greatest guitar players on the planet. Incredible fingerstyle player (National Fingerstyle Guitar Champion) and, also, one of the hottest Bebop/Django/Flatpicking players in the world. Tonight Richard Smith presents an evening of Travis picking, ragtime, jazz, and classical. The playing ranges from amazing to flashy and beautiful.
Here are a couple of quotes regarding Richard from Chet Atkins and Jerry Reed. “The most amazing guy I know on the guitar. He can play anything I know, only better.”
Chet Atkins, CGP

Richard Smith owns many instruments, but his most prized is a guitar, which has written on it, “To my hero, Richard” — signed Jerry Reed and Chet Atkins
Mandell says “Two Thumbpicks Up! Way up.”